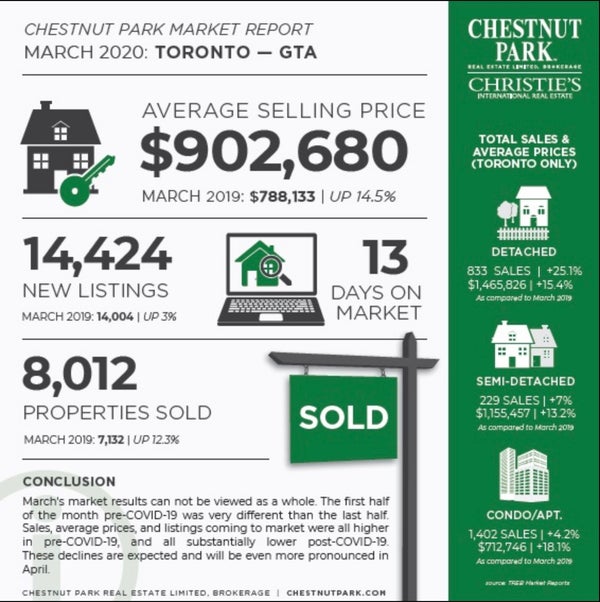 Until the Ontario Provincial Government declared a state of emergency, the Toronto and area residential resale market was on course to produce one of the strongest, most robust markets on record, including the establishment of a record-breaking monthly average sale price. All that changed around the middle of the month as people began following provincial health authorities directives: stay home, maintain social distancing, no large gatherings, and of course, wash your hands frequently. When many of Ontario’s businesses were ordered closed, the real estate market didn’t stop, but stalled dramatically.
Even with the collapse of the resale market in the second half of the month, March’s results were still substantially stronger than March 2019. This March 8,012 residential properties were reported sold by Toronto and area realtors, a 12.3 percent increase compared to the 7,132 sales reported last year. Similarly, the average sale price for March came in at $902,680, almost matching April 2017’s record of $920,000. By comparison last March the average sale price came in at $788,133, 14.5 percent less than March 2020. What makes these numbers even more remarkable, is that all the properties that were reported sold took only 13 days (on average) to go from listing to sale.
What is so disappointing, particularly for buyers, is that March appeared to be the first month in sometime when more much needed listings would come to market. Even with the abrupt hault in the market after March 15th, 14,424 properties came to market, a 3 percent increase compared to the 14,004 that came to market last year. In the second half of the month listings were being cancelled, suspended or moved from the multiple listing service to exclusive listings. By the end of the month, buyers were reluctant to visit properties as open houses became outlawed and real estate brokerages established rigid showing protocols. In order to protect the health and safety of its clients, agents, staff and the greater community, Chestnut Park put into place rigid showing restrictions, only allowing the showing of properties in emergency or exceptional circumstances.
But at the end of the day, March can be differentiated as the pre-COVID-19 and the post-COVID-19 markets. Effectively the date that demarcates these two markets is March 15. Here is what happened in those two markets.
1. During the first 15 days of March 4,643 properties were reported sold. This represented an eye-popping 58 percent increase compared to the number of sales recorded for the same period last March.
2. In the last half of the month 3,369 property sales were reported. This is a decrease of 15.9 percent compared to the same period last year. No doubt this is the most dramatic market change in the history of the Toronto and area resale market.
3. The average sale price for the entire month of March came in at $902,680. During the second half of the month the average sale price for all properties reported sold was only $862,563. During the first half of the month the average sale price was well over $1,000,000.
4. Even with the almost instantaneous change in market conditions after March 15, the average sale price for the city of Toronto still came in at $987,787, and that number included the reported sale of 1,402 condominium apartments which represented more than 50 percent of all reported sales in Toronto.
5. The average sale price for condominium apartments came in at $712,746 (city of Toronto) and average sale prices for condominium apartments in Toronto’s central core came in at $789,250. There is little doubt that without the abrupt change in Toronto’s condominium apartment market place, we would have witnessed a $800,000 plus average sale price for condominium apartments in Toronto’s central core.
So what does all this data tell us? Firstly, March’s numbers clearly indicate how strong the Toronto and area residential resale market is today. Even with everything that transpired, sales and average sale prices were still substantially stronger than March of 2019. The data also indicates that when we have dealt with COVID-19 the market should rebound exponentially. We can only hope that we have enough available properties to meet the pent up demand. Secondly, the numbers for the second half of March point to a dismal April market. The slide that began after March 15 can not only be expected for April, but will likely be even more pronounced, given that we will only be hitting the virus’ peak late in the month. Please everyone, stay safe and follow the directions of the Province’s health authorities.
PREPARED BY:
Chris Kapches, LLB, President and CEO, Broker